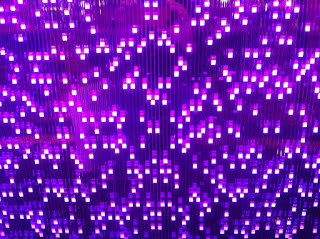 It’s no big surprise that shop fronts of course are ultimately the most important part of your store. What else evokes a customer’s thoughts and impressions of a company, other than a shop? Absolutely nothing. A shop in itself is an expression of what sort of company a customer intends to set foot in, and any sort of establishment that finds itself lacking in this department may as well have the product on the floor, and be unmanned. Colour theory is that important. It’s a psychological influence that all retailers (large or small) make use of. An understanding of colour is nothing without access to a variety of amazing lighting devices such as LED Rope Lighting or LED Strip Lighting - which are a cheap, efficient, versatile and absolutely stunning way to convey message and theme.Oscar Wilde himself stated that - “Mere colour, unspoiled by meaning, unallied with definite form, can speak to the soul in a thousand different ways.” There were many ways that Oscar Wilde deserved being called a genius, and we find his appreciation of non-verbal communication one of them.
Perhaps the most paramount of all non-verbal communication, colours speak volumes in a fraction of a second. They convey feeling, thought, mood, and ultimately decide what mood your customer will likely be. A customer is alike any other human being. They don’t appreciate being told how they feel, though colour theory is as useful as background music in order to allow a little push. When the right colour emotion is harnessed, brands are established and your customers are on their way to an experience. Ultimately, the colour spectrum is linked to human response - and the selection of a colour palette in store should be made to support a total image and design theme of the retailer. All well and good for larger companies with allocated budgets of thousands upon thousands of pounds specifically dedicated to branding, but for businesses that are independent, where can they turn? Freelance designers may help the most busy of us, though colour theory isn’t a difficult thing to learn. While it certainly can’t be done in a day, getting accustomed to terms and phrasings and even understanding them can indeed be done. As a start, there are three basic approaches to the composition of colour in store lighting.
Monochromatic colour schemes consist of different values (tints and shades, essentially) of a single colour. Widely seen as the easiest of a retailers’ options, these colour schemes are rather easy to get right and can be very effective. An excellent starting point for most independent and small retailers, though the big boys are known to use monochromatic colour to great effect as well. However, they do lack diversity and can be seen as a little out of fashion following trends leaning toward contrast in 2016.Harmonic colour schemes will likely never go out of fashion, as what looks good is universally seen as timeless. Harmonic describes two or three colour relationships that have been found to be pleasing to the eye - which have the same intensity, saturation and tone. Can be called complimentary colour, in Australia and America.

Contrasting colour demonstrates large differences between two colours. The hardest to get right of the three, Contrast isn’t just limited to colour. Colours are determined by value, hue and saturation - and contrasts between all three can be used to create bold, dynamic, and dramatic colour schemes for any retail establishment.


Certainly one of the most powerful elements of design for retail environments, colour carries meaning through association as well as stimulation of a shopper’s psychological response. Image Credit: Anita Hart | CC-BY-2.0