The Different Types of Diamond Core Drilling in London and Beyond 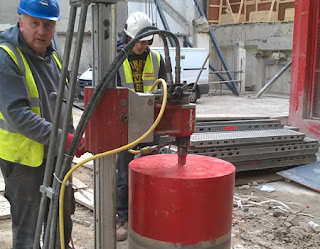 Diamond Core Drilling in London, throughout the UK, and throughout the world is all used for the same purpose. Diamond Core Drilling is a technique that allows the manipulation of brittle materials such as glass, as well as set materials such as asphalt and concrete. It might not seem so, but concrete and glass have quite a lot of similarity. They are both materials which are strong in some respects and quite delicate in others.

Both glass and concrete are rather prone to shattering when in a set state, and both have the potential to have work on it create stress marks which will result in shattering sooner or later.

For the built environment, improperly drilled concrete is very much a ticking time bomb. One only has to look at the recent tragedy in Italy – the Genoa motorway bridge – and the 43 killed people as a result of the collapse in order to see why.

While indeed it has been ascertained that the strength of the bridge had been reduced by 20% by corrosion of the metal cables, Genoa’s tragedy is an excellent example of which the construction and civil engineering industry take health and safety quite so seriously.

Diamond Drilling is often carried out in a number of ways, depending on the needs of the specific material being worked upon. There is the option of wire-line, double or triple-core barrel diamond drilling to choose from, and your diamond drilling company will be able to establish which method of diamond core drilling is best for the job at hand.

Some of these techniques are as follows: